If you have ever descended to the bottom of the Mir kimberlite pipe in Yakutia (525 meters) or, more likely, visited the world’s deepest metro station Arsenalnaya in Kyiv (105.5 meters), then you know the feeling of being in a really deep hole. However, there are larger holes in the Earth.

In 1858, in England, they decided to dig a 122-meter well, which was supposed to provide water for an administrative building under construction in the small town of Woodingdean. The pit was dug by prisoners from a nearby prison, by hand, with candles attached to their helmets. Unfortunately, having reached the planned depth, the workers did not find water. As a result, the construction of the deepest well in the world took four years of continuous work, and its depth was 392 meters.

The well is in the yard of Nuffield Healt Brighton Hospital in Woodingdean (coordinates in google maps).

💚 BY TOPIC: What is the speed of light and what objects can overcome it. 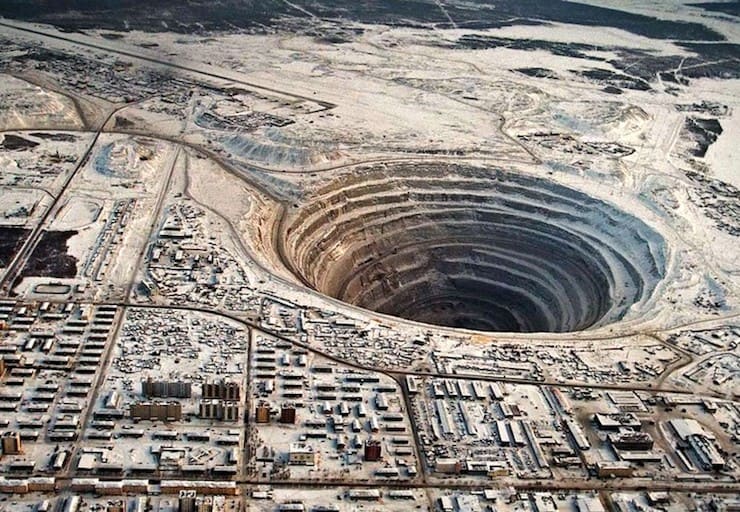 The most famous Russian quarry, which gained popularity due to the mass of beautiful aerial photographs, in which a gaping abyss with a diameter of 1200 meters borders on urban infrastructure. Open pit diamond mining was carried out here from 1957 to 2001, and the underground mine was decommissioned in 2017 after emergency flooding.

The Mir kimberlite pipe is located in the Russian city of Mirny, the administrative center of the Mirny district of the Republic of Sakha (Yakutia) (coordinates in google maps).

💚 BY TOPIC: Simon is the world’s first smartphone that appeared 15 years before the iPhone (video). 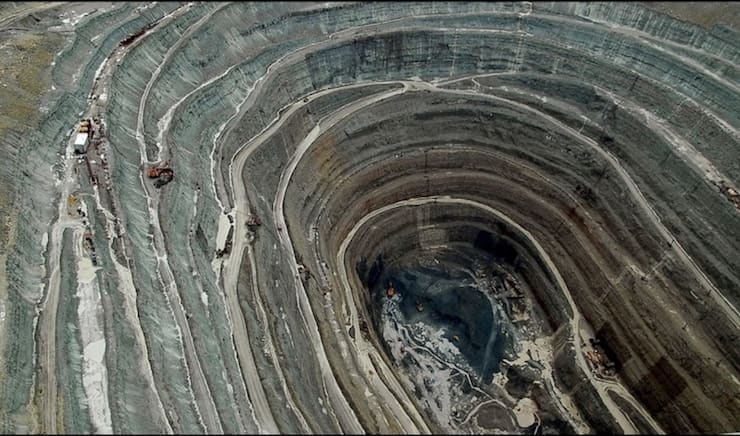 Another Yakut diamond deposit near the village of the same name, a few tens of kilometers from the Arctic Circle. The development of this deposit is carried out today, in an open way and in underground mines.

The Udachnaya kimberlite pipe is located in the Russian city of Udachny, Mirny District, Republic of Sakha (Yakutia) (coordinates in google maps).

💚 BY TOPIC: Famous artists of the “circus of freaks”: people with amazing anatomical abnormalities. 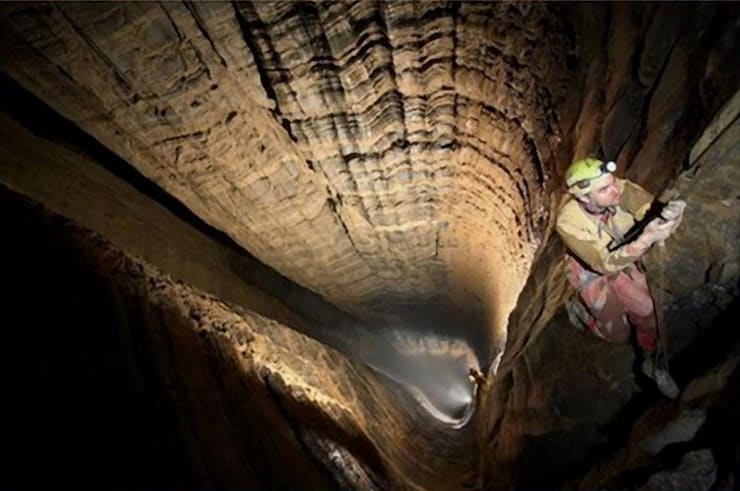 In Russian (translated from Slovenian) it is called the Cave of Vertigo, although, in fact, it is not a cave, but only one of its karst wells. 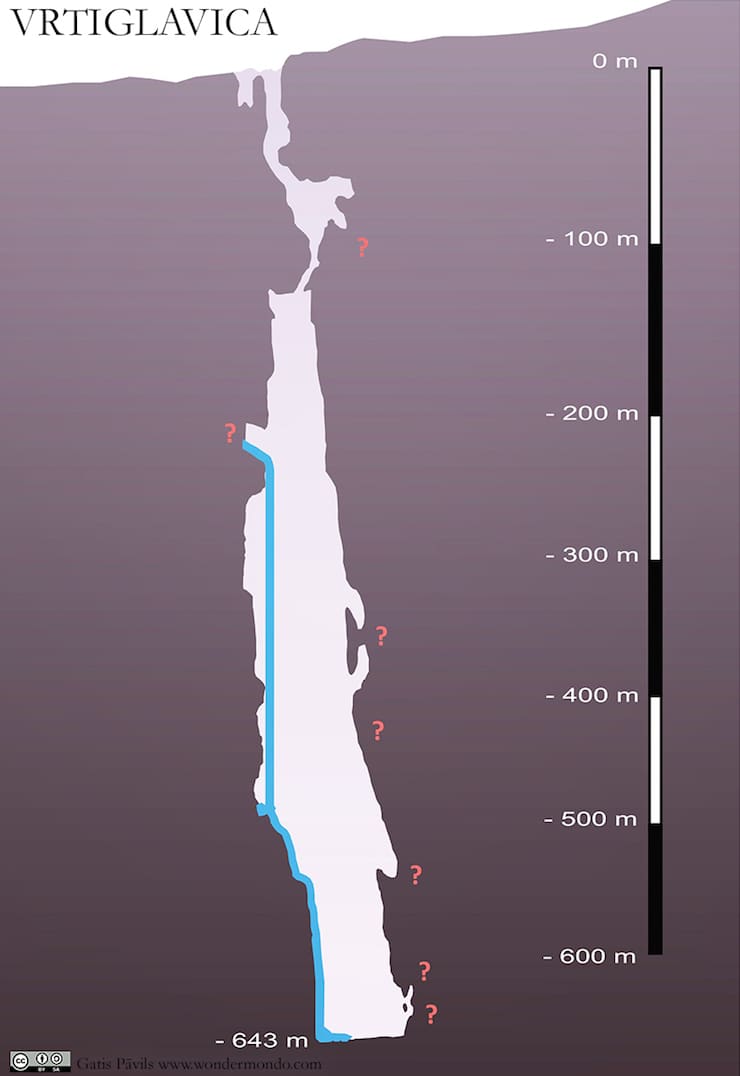 However, this is the largest and most impressive karst well in the world, the descent to the bottom of which will not be called an easy walk even by an experienced caver-alpinist.

This attraction is located in the Julian Alps, the karst massif of Mount Kanin in Slovenia near the border with Italy (Approximate location coordinates in Google Maps).

💚 BY TOPIC: Why the dollar is called the buck, denoted by the symbol $ and other interesting facts about the American currency. 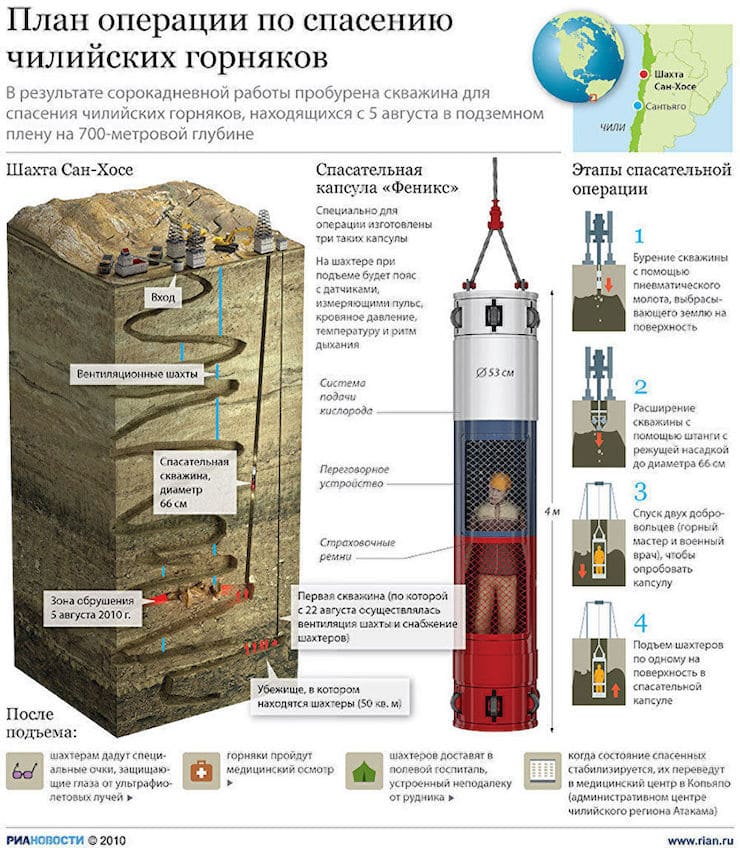 On August 5, 2010, a rockfall occurred at the San Jose mine in Chile, as a result of which 33 miners were completely isolated at a depth of 700 meters. Considering the fact that auxiliary channels and ventilation shafts were under the rubble, the rescuers had to take an unprecedented step – to drill a 700-meter hole for an escape pod at an accelerated pace.

As a result, all 33 miners were brought to the surface alive after 69 days in the adit. In 2015, the film “33” was made about this incident, in which Antonio Banderas played the main role.

Coordinates of the mine in Google Maps.

💚 BY TOPIC: The first bicycle: the history of creation, the evolution of the design (photo). 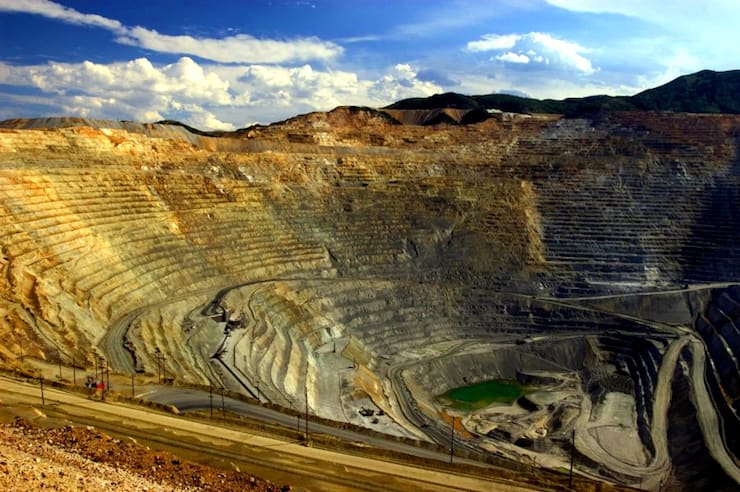 The above-mentioned Mir open pit diamond mine is striking in its scale, but it has a much larger competitor from the United States, which has been developed for more than 150 years.

When the first prospectors began to mine copper in Bingham, there was not only no canyon, but also a rather solid mountain 2.6 km high. However, after gold, silver and molybdenum also began to come across along with copper, people could no longer be stopped, the result was a hole in the ground 1.2 deep and 4 km in diameter. 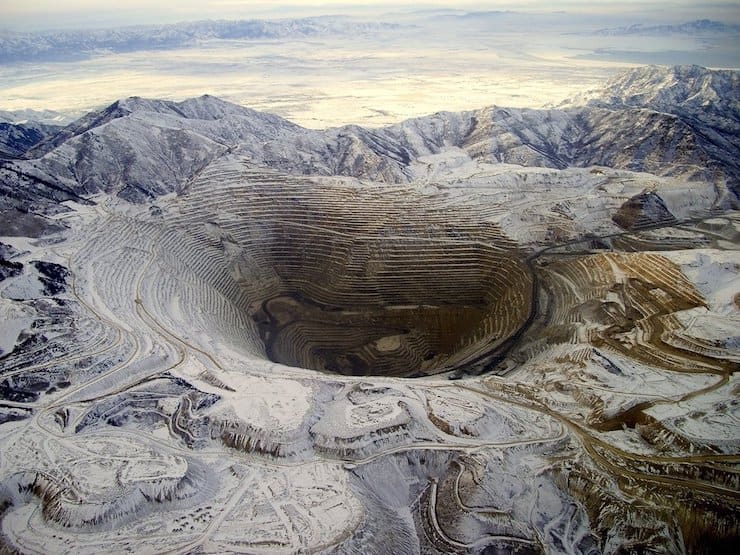 In 2013, a block of earth with a volume of almost 70 million cubic meters fell off from the very top of the quarry wall, the fall of which caused an earthquake with an intensity of 2.5 on the Richter scale.

The Bingham Canyon mining site is located in the Western United States, in the state of Utah, in the Oker Mountains (coordinates in google maps).

💚 BY TOPIC: There are 16 circles in this picture, can you see them? 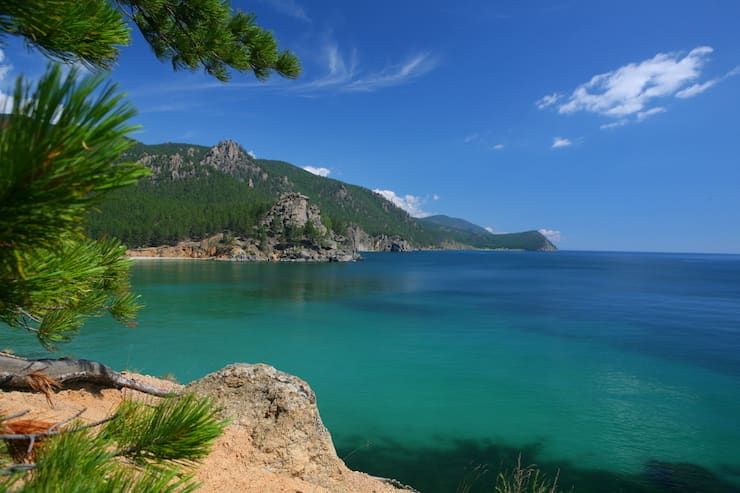 Lake Baikal is the deepest in the world. This 1642 meter deep pit is filled with fresh water, the volume of which is about 19% of all global. In fact, there is more water in Baikal than in all five Great Lakes of North America.

Baikal is located in the southern part of Eastern Siberia (coordinates in google maps).

💚 BY TOPIC: Who has the most followers on Instagram – the 40 most popular accounts. 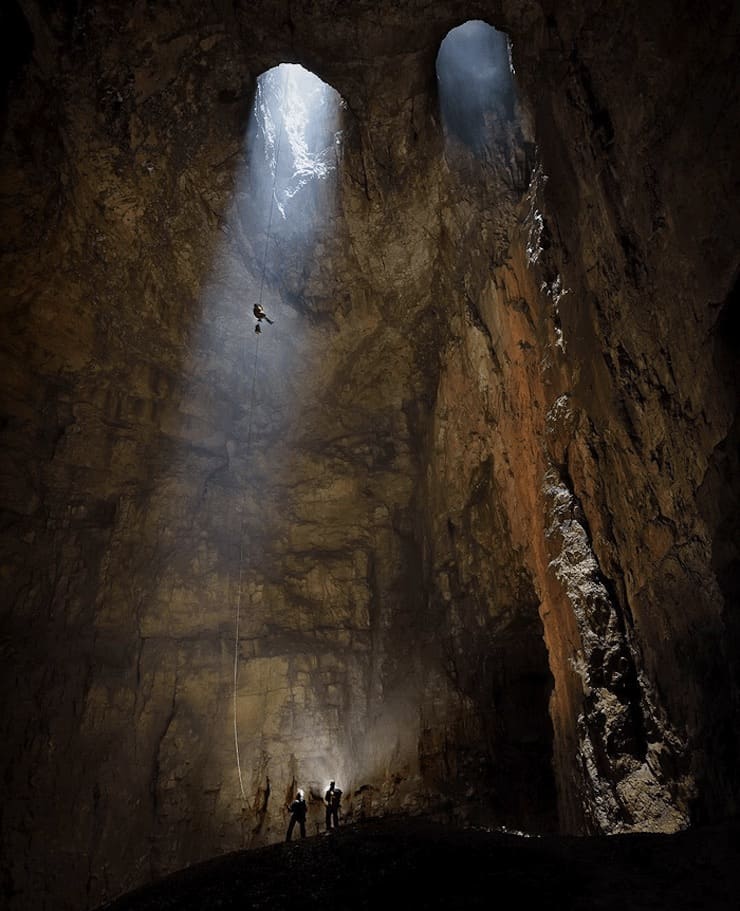 More recently, the deepest (and the only super-deep) cave in the world was considered the Krubera cave (Voronya, 2199 meters), belonging to the Arabica mountain range in Abkhazia. However, in August 2017, the Moscow team “Perovo-speleo” successfully completed another expedition in the Verevkina cave of the same Arabica mountain range, recording a depth of 2204 meters, and later increasing it to 2212 meters by measuring the bottom of the lake Nemo’s last stop.

Verevkina Cave is located on the Arabica Plateau, belonging to the Gagra Range of the Western Caucasus in the territory of Abkhazia (coordinates in google maps).

💚 BY TOPIC: Talking parrot: which birds speak, are easiest to learn and how to teach to speak. 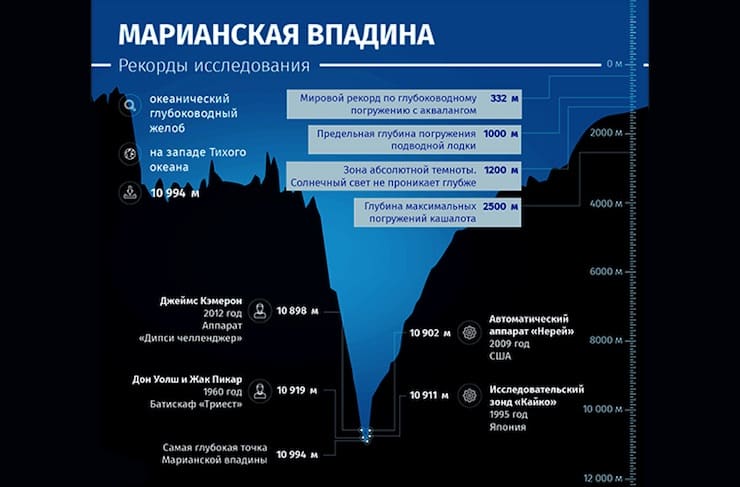 The deepest hole of natural origin on our planet, located in the Pacific Ocean near the islands of the same name. The lowest point of the Mariana Trench (or Mariana Trench) is called the “Challenger Deep” in honor of the British corvette, whose crew in 1875 lowered the lot by more than 8000 meters. The exact depth of the Mariana Trench is unknown due to the complexity of measurements; according to 2011 data, it is 10,994 meters. Thus, the deepest point of the depression, called the Challenger Deep, is further from sea level than the top of Mount Everest is above it. It is located in the southwestern part of the depression, 340 km southwest of the island of Guam (coordinates in google maps).

💚 BY TOPIC: Space speeds – how fast do you need to fly to leave the Earth, the planetary system and the galaxy?

Sakhalin-1 is an international project operated by the American company ExxonMobil, its purpose is to extract oil and gas from the northeastern shelf of Sakhalin Island. As part of the project, several wells were drilled, which are erroneously indicated by some sources as the deepest in the world. Actually, this longest wells in the world (max. 12,700 meters), but they are drilled at an acute angle to the Earth’s surface.

🍏 We are in Telegram and YouTubesubscribe!