Happy owners of 8-bit Dendy game consoles (or Family Computer, Subor) in the 1990s could enjoy not only games with familiar joysticks, but also practice shooting from a light gun, the principle of which remained a mystery even to parents.

💚 BY TOPIC: You probably do not know the first names of Sony, Google, Ebay, Nintendo, Megafon, Firefox, etc.

The idea of ​​light shooting galleries was first realized in the 30s of the last century. A light source was installed in the barrel of the gun, and a photocell was attached to the target, the hit was counted when the latter was triggered. Subsequently, the light source and receiver were swapped, which simplified the design itself and its calibration.

On the same simple principle, the Zapper pistol was built, which was equipped with game consoles. Unfortunately, among the parents of that time, the version was more popular, according to which the gun fired infrared rays that could land a kinescope and cause blindness, so it was strictly forbidden to play with the device for a long time and direct it at people.

If you disassemble such a pistol, then its device will turn out to be disappointingly simple – a few wires connecting the prefix, the trigger and a small microcircuit with a photocell. 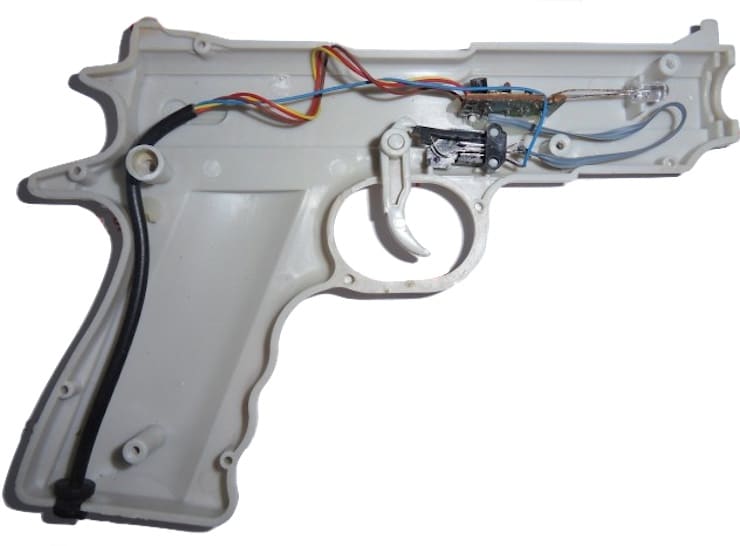 At the moment the trigger is pressed, the set-top box sends one completely black frame to the TV screen, and leaves a small white area in the next frame. It’s only two frames out of 25 in one second, so we don’t even notice this flicker. The white area in the second black frame is a target, a duck in Duck Hunt, or a bandit in Wild Gunman.

It is not difficult to guess that after pressing the trigger, the photocell should have sent a simple command of the form 0 0 (black black, miss) or 0 1 (black white, hit) to the prefix. The game Hogan’s Alley originally used a black background, since there could be three targets on the screen at once, and then the result of a successful shot was recorded as 0100, 0010 or 0001.

The most inquisitive gamers in those days discovered through trial and error that a hit is counted if you simply shoot at a light bulb on the ceiling. However, cheating was strictly punished – the photocell in the barrel of the pistol quickly became unusable after repeated use of this method.

As for LCD screens, they cannot be used with Zapper type light guns for several reasons. Firstly, they have a buffering delay of up to 60 ms, while a half-frame on analog TVs lasts three times less. Secondly, HDTV, in principle, cannot change black to white and vice versa with such speed. This was probably the reason why the dreams of all Dendy gamers about future full-fledged shooters with a physical pistol were postponed for several decades.

🍏 We are in Telegram and YouTubesubscribe!