After months of rumors, AMD has officially introduced the Radeon RX 6600. As expected, the smaller brother of the RX 6600 XT is equipped with the Navi 23 XL GPU, which has 28 compute units and 1,792 stream processors. In addition, there is an Infinity Cache of 32 MB and 8 GB of gddr6 memory, the latter uses a 128-bit memory bus and a bandwidth of 224 GB/s.

According to AMD’s marketing slides, the RX 6600 and RTX 3060 are evenly matched, which is confirmed by reviews: according to Tweakers the Nvidia card is on average 3.7% faster in 1080p.

The RX 6600 has a suggested retail price of 345 euros, although there will be no reference design from AMD on the market, just like with the XT version. At the time of writing, the PowerColor Hellhound is the cheapest available model in the product comparator, with a price tag of 459 euro. At the other end of the spectrum is the ASRock Challenger, which is changing hands for 579 euro.

It looks like AMD’s partners have reused their cooler from the RX 6600 XT for the RX 6600 models: Gigabyte, MSI and PowerColor, among others, have unveiled their dual-slot implementations. Where the MSI Mech, PowerColor Fighter and Hellhound editions have to make do with two fans, the Gigabyte Eagle version gets three fans. They all use a single 8-pin power plug, as the RX 6600 has a modest tbp of 132W. 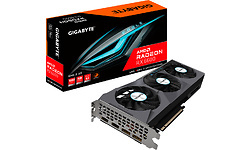 About Eshan William 6144 Articles
A 25 years old blogger. Other than gaming, I like watching documentaries and working on cars. A hardcore PC gamer is what I have always been and always will be.